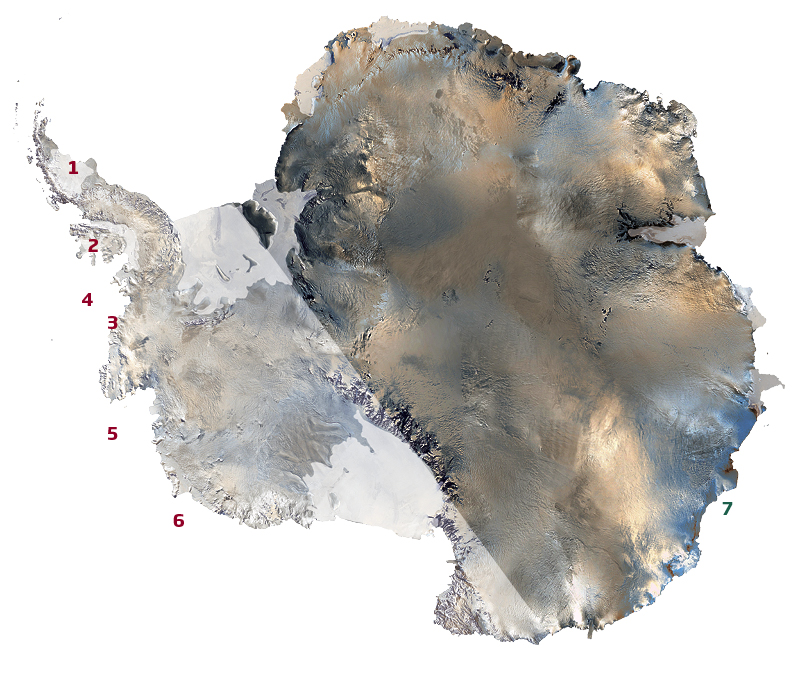 “The floating ice shelves surrounding the Antarctic Ice Sheet restrain the grounded ice-sheet flow. Thinning of an ice shelf reduces this effect, leading to an increase in ice discharge to the ocean. Using eighteen years of continuous satellite radar altimeter observations we have computed decadal-scale changes in ice-shelf thickness around the Antarctic continent. Overall, average ice-shelf volume change accelerated from negligible loss at 25 ± 64 km3 per year for 1994-2003 to rapid loss of 310 ± 74 km3 per year for 2003-2012. West Antarctic losses increased by 70% in the last decade, and earlier volume gain by East Antarctic ice shelves ceased. In the Amundsen and Bellingshausen regions, some ice shelves have lost up to 18% of their thickness in less than two decades.” Read more (paid) >

The ice sheets sitting over Antarctica’s land hold the equivalent of 60 metres of sea level. The key question is why there seem to be an overall underestimation of this aspect of climate change. After all 6o meter is a lot and will ‘drown’ eventually all cities directly situated near the sea, if Antartica continues to melt. Most of the larger cities are in fact. Most countries wil disappear. A political sense of urgency seems to be diverse, fragmented and not focused.  This report of Science is noteworthy.

If public risk management is focused on safeguarding public values, and is a metaphor for good public governance, then we think climate change is a major issue for citizens, society, businesses, the natural environment and of course for politics and government. It is time to join forces.