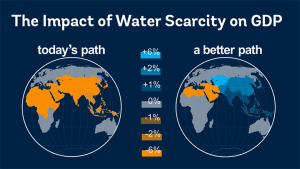 From Executive Summary: “The impacts of climate change will be channeled primarily through the water cycle, with consequences that could be large and uneven across the globe. Water-related climate risks cascade through food, energy, urban, and environmental systems. Growing populations, rising incomes, and expanding cities will converge upon a world where the demand for water rises exponen- tially, while supply becomes more erratic and uncertain.

If current water management policies persist, and climate models prove correct, water scarcity will proliferate to regions where it currently does not exist, and will greatly worsen in regions where water is already scarce. Simultaneously, rainfall is projected to become more variable and less predictable, while warmer seas will fuel more violent oods and storm surges.

Climate change will increase water-related shocks on top of already demanding trends in water use. Reduced freshwater availability and competition from other uses—such as energy and agriculture—could reduce water availability in cities by as much as two thirds by 2050, compared to 2015 levels.” >>

The report finds that water scarcity, exacerbated by climate change, could hinder economic growth, spur migration, and spark conflict. However, most countries can neutralize the adverse impacts of water scarcity by taking action to allocate and use water resources more efficiently. Key Findings: