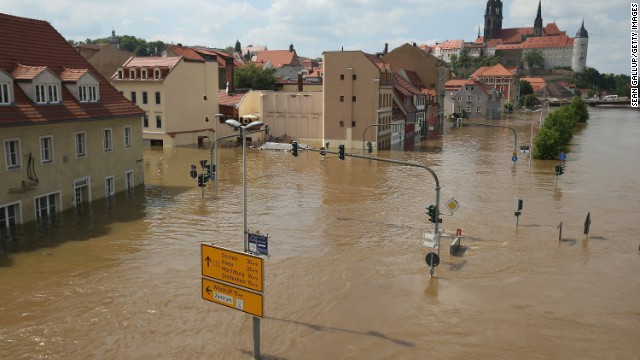 Firemen evacuate residents in a rubber boat from the Halle Neustadt district flooded by the swollen Saale river on June 6, 2013 in Meissen, Germany. Eastern and southern Germany are suffering under floods that in some cases are the worst in 400 years. At least four people are dead and tens of thousands have evacuated their homes.

The German federal state of Rheinland-Pfalz is well advanced in its programme of actions required to comply with the provisions of the EU Flood Directive. So far, the preliminary flood risk assessments; the flood hazard maps; and, the flood risk maps have been completed for the entire state. In early 2011, the flood risk management plans for the River Nahe (4.000 km.) catchment were commenced.

These follow the framework set out in the German LAWA-directive “Recommendations for the Establishment of Flood Risk Management Plans” which includes a comprehensive guide to all the diverse action areas that occur in the flood risk management cycle. Appropriate policy objectives have been set and strategies formulated.