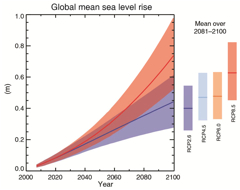 Press Release
STOCKHOLM, 27 September – Human influence on the climate system is clear. This is evident in most regions of the globe, a new assessment by the Intergovernmental Panel on Climate Change (IPCC) concludes. It is extremely likely that human influence has been the dominant cause of the observed warming since the mid-20th century. The evidence for this has grown, thanks to more and better observations, an improved understanding of the climate system response and improved climate models.
Warming in the climate system is unequivocal and since 1950 many changes have been observed throughout the climate system that are unprecedented over decades to millennia. Each of the last three decades has been successively warmer at the Earth’s surface than any preceding decade since 1850, reports the Summary for Policymakers of the IPCC Working Group I assessment report, Climate Change 2013: the Physical Science Basis, approved on Friday by member governments of the IPCC in Stockholm, Sweden.
“Observations of changes in the climate system are based on multiple lines of independent evidence. Our assessment of the science finds that the atmosphere and ocean have warmed, the amount of snow and ice has diminished, the global mean sea level has risen and the concentrations of greenhouse gases have increased,” said Qin Dahe, Co-Chair of IPCC Working Group I. Read more>
Summary for Policymaker
The Working Group I contribution to the IPCC’s Fifth Assessment Report (AR5) considers new
evidence of climate change based on many independent scientific analyses from observations of
the climate system, paleoclimate archives, theoretical studies of climate processes and simulations
using climate models. It builds upon the Working Group I contribution to the IPCC’s Fourth
Assessment Report (AR4), and incorporates subsequent new findings of research. As a
component of the fifth assessment cycle, the IPCC Special Report on Managing the Risks of
Extreme Events to Advance Climate Change Adaptation (SREX) is an important basis for
information on changing weather and climate extremes.
This Summary for Policymakers (SPM) follows the structure of the Working Group I report. The
narrative is supported by a series of overarching highlighted conclusions which, taken together,
provide a concise summary. Main sections are introduced with a brief paragraph in italics which
outlines the methodological basis of the assessment. Read more>