What risks are actual embedded in the approach of our public debt. It is clear that we should listen to one another, because one strategy seems not to fit all. Our public leaders Sarkozy, Obama and Merkel circle around the facts and the different strategies. This article shares a light on the different angles and aspects of the different approaches.

“Austerity measures to cut public debt and rein in speculation on the euro are threatening to kill the fragile economic recovery, warned policymakers ahead of a summit aimed at strengthening budget discipline in the European Union. Maria João Rodrigues, former special advisor at the European Commission and an economics professor, spoke to EurActiv in an interview. Maria João Rodrigues was a special advisor to the European Commission on the Lisbon Strategy for growth and jobs.

EU leaders are meeting on Thursday to agree on the Europe 2020 agenda for growth and jobs. What do you see as the main advances of the new strategy compared to its predecessor, the Lisbon Agenda?
There was an effort to update the strategic priorities taking into account the extent of the challenge. The group of challenges is wider today than in 2000 because we are confronted with competitors from all around the world. There are lots of emerging economies, not just the United States and Japan. On the environment, the central challenge now is climate change and regarding demographic trends, the ageing problem is now deeper. ‘Europe 2020’ made an effort in coping with these challenges.” Read more >

The oil well and the damage done

BP counts the political and financial cost of Deepwater Horizon

A disaster as the oil leak in the Gulf of Mexico is not anymore the domain of a private company, an accident, but has been centered into the heart of the public domain, public governance and of public risk management. This story in The Economist share the common thoughts of what happened, what we feel today and shares some thoughts on what will come. It seems that we will enter a new era of public risk management.

The Economist:
““WHO cares, it’s done, end of story, will probably be fine.” Thus, in an e-mail, a manager at BP wrote of the decision to use only a few “centralisers” when cementing into place the pipe that ran from an oil reservoir 13,000 feet (4,000 metres) below the sea floor to Deepwater Horizon, the drilling rig floating 5,000 feet above it. The cement failed—considerably more likely with fewer centralisers, experts say—four days after the e-mail was sent, on April 20th. Oil and gas rushed up the well, dooming the rig and 11 of her crew. Two months on, after perhaps 3m barrels of oil have leaked into the Gulf of Mexico, the story has still not ended and a lot of people, from those who dwell on the gulf coast to the chief executive of BP and the president of the United States, care very much indeed.” Read more >

Xynthia, a younger sister of Katrina?

The International Katrina Project (IKP) seems to become more actual by the week. Last week an Atlantic storm hits France and combined with heavy rainfall caused flooding and killing people. The IKP and PRIMO already discussed possible new approaches on improving crisis and risk management related to such impacts. One thing is for sure, many improvements are to be made in the coming years. Communication, coordination and cooperation are critical success factors.

Source: SMH
“France has declared a national disaster after hurricane-force winds, surging seas and driving rain battered Western Europe, leaving at least 53 people dead and more than a million households without power. The President, Nicolas Sarkozy, was to visit France’s storm-affected Atlantic coast, where about 45 people were killed in flooding and violent winds. The Atlantic storm, named Xynthia, crashed against the western coasts of France and Spain, bringing with it foul weather stretching from Portugal to the Netherlands and inland as far as Germany.” <a href=” Read more >

Written by redacteur on 18 June 2010. Posted in Climate & Environment, Economy, Finance, In the news, Risk Management.

The most far-reaching approach to risk management is taking radical measures and simply block further loss of precious values, societies and ecosystems. Blocking desertification in Chad financed by the World Bank is such a mega-project. It seems to be an example of smart thinking and a holistic and coordinated approach. The risks related to the project itself will be assessed and permanently monitored by the World Bank.

“Heads of states from African countries are concluding a meeting on 17 June in Chad’s capital N’Djamena to launch a transcontinental 7,000-km tree planting project, from Senegal to Djibouti in east Africa. When asked if the long-discussed but yet-to-be funded Green Wall initiative was too ambitious, Térap told IRIN: “We have to attack the problem, long ignored, through vision, ambition – and trees. What is wrong with ambition?” The countries involved in the initiative include Senegal, Mauritania, Mali, Burkina Faso, Niger, Nigeria, Chad, Sudan, Ethiopia, Eritrea and Djibouti.” Read more > 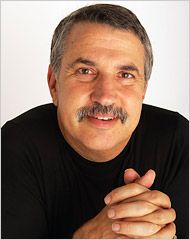 This Time Is Different

The Black Swan in the Gulf of Mexico will probably lead us to a turnaround in thinking about public risk, players and stakeholders, the blame, our precious environment and more than that about the precautionary principle, it’s risk management and public governance. It could lead us in a new, more sustainable direction. Last week Thomas L. Friedman, journalist at the New York Times, published this article, which we think is a special one to reflect on.

“I’d like to join in on the blame game that has come to define our national approach to the ongoing environmental disaster in the Gulf of Mexico. This isn’t BP’s or Transocean’s fault. It’s not the government’s fault. It’s my fault. I’m the one to blame and I’m sorry. I’m the one to blame and I’m sorry. It’s my fault because I haven’t digested the world’s in-your-face hints that maybe I ought to think about the future and change the unsustainable way I live my life. If the geopolitical, economic, and technological shifts of the 1990s didn’t do it; if the terrorist attacks of Sept. 11 didn’t do it; if the current economic crisis didn’t do it; perhaps this oil spill will be the catalyst for me, as a citizen, to wean myself off of my petroleum-based lifestyle. ‘Citizen’ is the key word. Read more >

FOR Barack Obama’s knee-jerk foes, of course it was his Katrina. But for the rest of us, there’s the nagging fear that the largest oil spill in our history could yet prove worse if it drags on much longer. It might not only wreck the ecology of a region but capsize the principal mission of the Obama presidency.

Before we look at why, it would be helpful to briefly revisit that increasingly airbrushed late summer of 2005. Whatever Obama’s failings, he is infinitely more competent at coping with catastrophe than his predecessor. Read more >

Twenty years ago The Club of Rome brought forward the prognose that with the present techniques (1990) there would be enough drinkable clean water on Earth for 3 billion people. Now we are with much more people on our planet. Of course techniques are better, but with the combination with climate change makes it all more and more a puzzle. Cyprus is struggling.

Cyprus runs the risk of desertification by the end of this century as it feels the brunt of climate change and drought, an expert warned. Studies project a rise in summer temperatures on the east Mediterranean island of between two and four degrees this century, compared to the 1960 to 1990 reference periods, Professor Manfred Lange, a geophysicist, said in an interview. “I think that there is a very definite potential for dramatically increasing desertification,” said Lange, director of the Energy, Environment and Water Research Centre at the non-profit Cyprus Institute.

Risks on Climate Change: it gets worse

In Copenhagen Scientists and politicians are discussing this week during the “International Scientific Congress on Climate Change the “global risks, challenges and decisions on climate change”. All organized by the University of Copenhagen.

What are the risks we are facing and how do they impact us this century. Four leading experts brought forward that sea levels appear to be rising almost twice as rapidly as forecasted two years ago: 50 to 100 cm by 2100. If this is true we need to prepare ourselves. The conference in Copenhagen is a chance for science to awaken the politicians, which will meet by the end of this year on the Copenhagen 2009 Climate Conference. How to convince politicians, in fact they represent us, so how to convince ourselves, that it is getting worse and that the conference to come is important for the climate.

Risk management will start for politicians with taking the scientist very serious and trust there predictions. Otherwise new risks from nature and ecosystems will emerge and expand further and have impact on our cities, our people, our nature itself, our lives. It will have hugh impact on city management all along the worlds coastlines and area’s under sealevel.

The Greenland icesheet, Danmark, seems to play a keyrole here. Copenhagen therefor is the place to be.

“What challenges are likely to affect your company in 2009 and beyond? The credit crunch aftershocks and the deepening global recession, rank as the most important business risks for 2009, displacing regulation and compliance from the top spot. Green initiatives, competition from new entrants, human capital issues, and reputational risk all rose in the new Ernst & Young report.